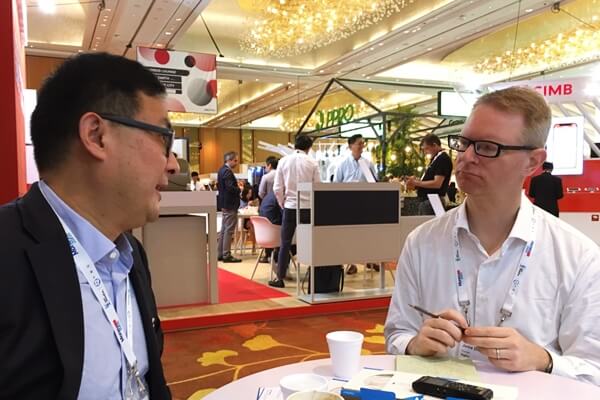 The company is currently applying for a stored-value facility (SVF) license, which will allow it to take deposits for digital services, but it can’t lend or offer interest to customers. The Hong Kong Monetary Authority is expected to issue its first virtual bank licenses later this year, which should enable a fuller range of services.

Qu says Geoswift may not be ready to apply for the first batch of licenses, given it is still in the application process for a SVF, but he says the fuller license would allow Geoswift to consolidate its suite of services in a digital format. “With a virtual license, we can create a one-stop solution,” he told DigFin, speaking on the sidelines of a recent Money 20/20 conference in Singapore.

Many-to-one
The company has offices in Canada, the U.S., the U.K., Beijing and Shanghai, as well as Hong Kong. It provides cross-border payments for China-related activities, it handles remittances, it issues debit and credit cards, and it provides foreign exchange for retail customers.

It uses APIs to provide solutions for large-volume but small-size transactions, which are too costly for the traditional banking system to manage. The company’s tech platform is designed to facilitate transactions involving multiple counterparts, rather than bilateral wire transfers that typify traditional correspondent banking.

“WITH A VIRTUAL LICENSE, WE CAN CREATE A ONE-STOP SOLUTION” – Raymond Qu, Geoswift

Neo-Bank F.I.
Qu says Geoswift is in discussions its first bank partner, a global firm based in the U.S. He denied the company is trying to disrupt the huge FX flows between China and the world that big U.S. banks dominate; the potential partnership with a U.S. bank is based on it outsourcing small-value transactions processing to Geoswift.

He’s also trying to get a license from China’s State Administration for Foreign Exchange, an arm of the central bank, to be the first to provide digital pre-paid foreign exchange to Chinese travelers (they could use an app to have foreign currency waiting for them to be picked up at a Chinese airport before a trip). Geoswift is currently the only non-bank licensed by SAFE to provide forex to retail in China.

All of these activities involve facilitating payments between Chinese and international businesses, ewallets, and consumers, that are too expensive or cumbersome for banks to do. A virtual banking license would allow Geoswift to consolidate its mobile payments work in a single app, and then extend its business activities.

For example, if Geoswift is helping Chinese suppliers get paid by big U.S. tech companies like Amazon, it could also lend to those suppliers. “They might not need a bank,” Qu said.

He says Hong Kong is the only jurisdiction in which Geoswift would seek a full-service digital license.

He says getting the business model right depends on knowing when another player in the industry is a partner, or a competitor; usually they are both, in separate areas or licensed business lines. He also acknowledges it will take time for some of Geoswift’s services in mobile payments to gain traction in markets like Hong Kong where retail consumers are happy using credit cards and cash. The onus will be on virtual banks to convince people to use them.

“Business is not about trying to kill the other guy, but whether you can offer your customer a better experience at a better price,” he said.